Fall Musical to premiere next week 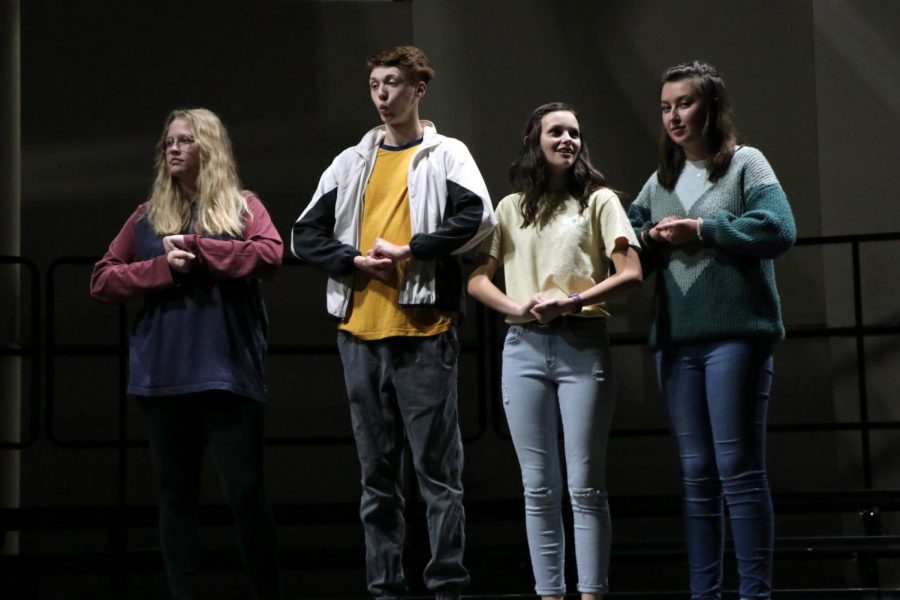 From left: Emma Prentice, Tyler Sole, Lorena Tomasic, and MacKenzie Russell are hard at work at an after-school practice.

The actors and actresses playing these characters have worked to adapt and create a piece of art, set to hit the stage on Thursday, Nov. 14.

Vocal music teacher Lauren Suchy decided to step up and volunteered for the head direction position and said she was happy to do so.

Suchy now focuses on the music portion, with accompanist Laura Peden serving as the assistant director in charge of blocking and English teacher Tim Hoffman running things on the technical side.

“My goals are for the production to be a success and to provide a production that both makes people laugh and moves them,” Suchy said. “I also want all students involved in the production to have a positive experience and to feel like they have worked hard to reach their goal of a successful show.”

One of the first changes Suchy implemented was to have the cast learn all the musical parts first.

By doing this, Suchy thinks the transition to blocking will be easier because they can incorporate the music, which will allow them to have a more complete and well-pieced together show on opening night.

Senior Emma Prentice, who will play the lead role of Jo March, likes Suchy’s approach, adding that rehearsals have become more relaxed and less stressful even as the cast is working hard.

Suchy believes that the audience will love the show and its intimacy.

“It’s a beautiful story of triumph through hardship and it’s accompanied by moving melodies and beautiful music,” Suchy said.

There will be three performances Nov. 14-16, beginning each night at 7 p.m. in the auditorium.